Photo of the Tullamore Suffrage Prisoners: Margaret Connery, Mabel Purser, Barbara Hoskins and Margaret Cousins c.1913. These Irish suffragists broke windows in Dublin Castle as a protest and were imprisoned in Tullamore.  Photo courtesy of the National Library of Ireland, NPA SHE33.

These brave women went to prison in protest at the refusal to grant women the vote.  Just one hundred years later in 2015 Irish women were not asked to consent to men being given the right to "self-id" as women under the Gender Recognition Act.

Last October The Irish Times reported on how the Irish Prison Service was struggling to find beds for female inmates amid a large rise in the number of women being sent to prison with the State's only two female prisons, the Dóchas Centre in Dublin and the women's section of Limerick prison both “consistently severely over capacity”.

The number of women in custody has been rising steadily since 2015 and had increased by 20% in the previous 24 months, double the rise in the general prison population of men. The newspaper reported that there were 192 women in the prison system, 166  in custody with the rest on some form of temporary release. The Irish Prison Service publishes daily the numbers being held as here, pre Covid-19 and any releases which have recently happened:

On this date, for instance, Limerick women's prison had the highest occupancy rate of all Irish prisons, at 143% of bed capacity.

However one of these prisoners is not a woman

One of those being held at the moment however is a man who despite being understood not to have had any surgery or be taking any hormone treatment “identifies as female” and "..was in possession of a gender recognition certificate by the time her case came before the court last July, and is now being accommodated with other female prisoners."

He was convicted of ten counts of sexual assault and one count of cruelty to a child.  This was reported as being the first time a person registered as male on their birth certificate had been remanded to the Dóchas Centre Women's Prison. The sex offender was assigned protective status by the Irish Prison Service and accompanied by two prison officers at all times when visiting the yard and other common areas of the prison.  The fear was that this prisoner would be victimised or attacked by women in the prison. He was subsequently transferred to Limerick women's prison.

The Irish Prison Service has said in response to the rise in numbers that it is implementing a “prison population management plan”, which would bring an additional 200 male and female beds into the system. It said it was also working with other criminal justice agencies on the “criminal justice operational hub”, a project to improve data analysis across the justice system.

However if the Irish Prison Service is now to put men with gender recognition certificates into women's prisons and count them as women it's questionable as to what value the data analysis will be.

In June 2018, the then Minister for Justice and Equality, Charlie Flanagan TD, launched the joint Irish Prison Service (IPS) and Probation Service (PS) strategic plan for 2018– 2020. This is the third joint strategy of these agencies.  One of its main actions is to  “Develop responses for female offenders”.

“The IPS and PS intend to build on current gender-informed approaches, broaden opportunities, and target through-care and resettlement into society. This work will be informed by joint research and best evidence-based practice on female offending and custodial trends. Interventions will aim to increase recovery and provide education and training. To help women and children affected by domestic violence and abuse, perpetrators of these crimes will continue to be targeted".

It's not clear how imprisoning men, including sex offenders, with women prisoners will be fed into these considerations.

The sex offender in Limerick Women's Prison is not the first such prisoner in Irish jails. The Sunday World said in July last year that it had reported also in the previous January that this was the second time "in recent months" that the Irish Prison Service had been called on to accommodate transgender inmates.  The paper had reported that an Indonesian national, who had been found in a brothel and remanded to Cloverhill Men's Prison on suspicion of being in the country illegally, “became violent when she learned that she was going to be housed in a male facility”. Dublin Live reported in 2018 that

The IPS confirmed since 2013 after the court process and committal process one person claimed to be transgender in February 2015 “at Cloverhill Prison for their short custodial period”.

Women prisoners are amongst the most vulnerable women in Irish society

The 2017 Dóchas Visiting Committee criticised the continued over-crowding at the Dóchas centre with the numbers reaching "well into the 130s during 2017."

“With a total capacity of 105, this is unacceptable over-crowding and a very serious strain on resources. It forces ‘doubling-up’, the use of bunk beds in small rooms and the use of Recreation rooms as sleeping quarters often with four beds to a room”.

The report found that despite management trying to alleviate the worst consequences of this problem it remained unresolved and “leads to disruption, behavioural problems and serious discontent.”

On top of this the Visiting Committee also reported to the Minister for Justice that “Allegations have come to our attention of inappropriate relationships between some women and a small number of male staff.”

Effect on women prisoners of being incarcerated with men

The former governor of Cornton Vale, Rhona Hotchkiss, says that in her experience it is "always an issue to have transwomen in with female prisoners”.

The Times reported Ms Hotchkiss in January 2020 as saying that that proposals to make it easier to switch gender would allow many more men “who may want to hurt women” to gain transgender status and then be jailed with women.

“She said that there were 22 individuals who were born male but identified as women in Scottish jails when she stepped down last year as the head of Cornton Vale, Scotland’s women’s prison. 'They were not all in the women’s estate but identifying as trans and looking to [transfer],' she said.”

The Scottish Prison Service told The Sunday Times that there were ten trans women behind bars in mid-January. At least three were understood to have been denied a transfer to the women’s jail because of concerns  that they posed a risk to themselves and women.

The Sunday Times reported in March last year that Britain is to create its first transgender “jail within a jail”.

“Downview is a women’s jail, and one source reported 'significant concern' among its 320 female prisoners at the arrival of male-bodied trans inmates. Almost half of trans prisoners are sex offenders, compared with 19% in the prison population as a whole. Prison governors and doctors say some sex criminals transition to get access to women.”

Andrea Albutt, president of the Prison Governors Association, said “They’re going to have to have some kinds of safeguards to make sure that a Karen White event doesn’t happen again,” she said. “That is the number one priority.”

White, born Stephen Wood, a convicted child sex abuser on remand for rape, was sent to a women’s prison after self-identifying as female, even though he still had his male genitalia.

Within weeks, he had sexually assaulted two women inmates. The case triggered a revision of prison guidelines, which said the “great majority” of trans prisoners should be allowed to “experience the system in the gender in which they identify”.

However in 2011 a research study on the conditions for women in Danish prisons suggested that the mixed gender principle had some potential negative consequences for women prisoners relating to rehabilitation efforts and general safety.

"The primary reason for establishing a women’s prison was based on a concern for their safety in mixed gender prisons. Thus reports of sexual harassment, women inmates feeling pressured into (sexual) relations with male inmates etc. were indicated by the aforementioned study. Secondly, women prisoners were in numbers a minority in the mixed gender prisons, where rehabilitation offers, occupation and daily activities were designed and based on a male norm. The ambition with an all women prison is that the rehabilitation programs can take on a more gender sensitive approach relevant for women and staff will be trained and in practice obtain more knowledge on how to address women prisoners in a more relevant and gender sensitive way."

The Danish Prison and Probation Service is now transforming an existing  prison to become a women only prison which is expected to be fully operational by 2021.

State said to have been placed in an impossible position

Robert Purcell, chair of the Law Society Criminal Law Committee told the Law Society Gazette in October that the Gender Recognition Act 2015 has placed the State in an impossible position with regard to transgender prisoners.

“The law that was enacted in 2015 did not envisage this situation, and it puts the Prison Service and the courts in a difficult position because, obviously, if somebody is self-declaring that they have to be recognised, then they have to be dealt with on that basis, even though physically, they have not have made the [physical] transformation.”

The Irish Penal Reform Trust's Executive Director Fíona Ní Chinnéide was reported in the Law Society Gazette as saying that many women in prison had prior experience of violence and abuse, including sexual, emotional and domestic abuse. If a prisoner had a history of gender-based violence against women, then this would need to be taken into account in decision-making about placement and regimes, she said.

However Ms Ní Chinnéide said that the creation of specific facilities for transgender prisoners in Ireland would be largely impractical, and risk individuals being held in isolation.

“Measures that should be taken include: accommodation in a single-cell, access to appropriate health care equivalent to that provided in the community, and body searches which are conducted in accordance with the expressed gender of the transgender prisoner.”

This in itself raises the question as to whether female prison officers should be entitled to refuse to search male bodies in prison, despite how a prisoner “identifies”.


In a submission to the NWCI CEDAW Shadow Report in September 2016 the IPRT said that "There is a clear need to address the issues of transgender prisoners in Ireland.  Although data for Ireland is lacking, international research indicates that transgender people are overrepresented in the prison population,".  The IPRT listed "specific vulnerable groups" of women in the Irish penal system: 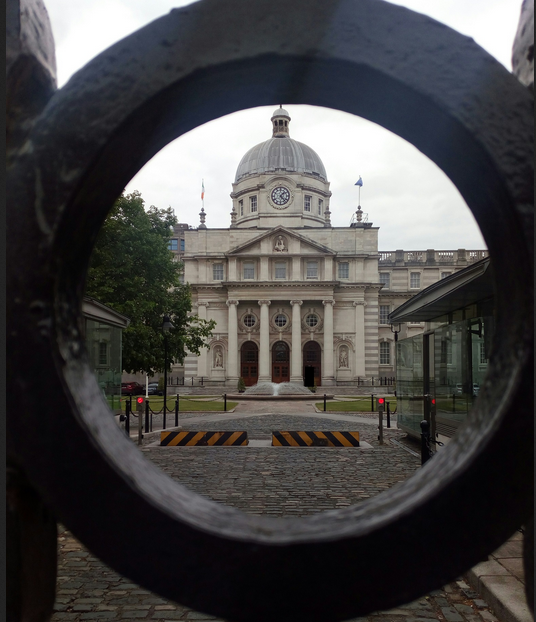 A government advisory group recommended medical gate keeping for a Gender Recognition Certificate but with weeks to go the bill was completely altered and became a self-id Gender Recognition Act in 2015. Why did legislators agree to this change and why were women's rights not considered? 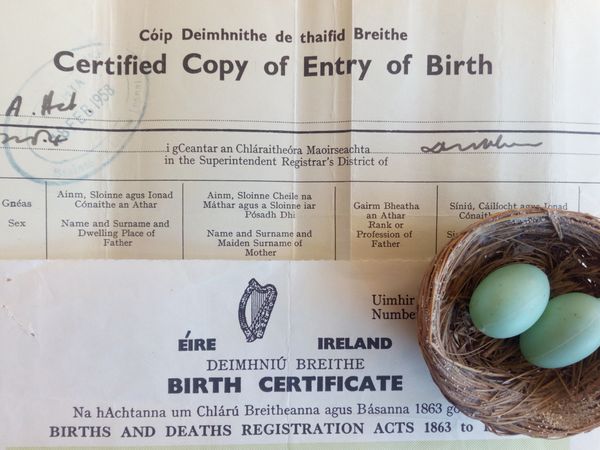 Why are those with Differences of Sex Development (DSDs) being "incorrectly" grouped with sexual and gender identities? Why are campaigners doing this?